A fish spawning aggregation is a grouping of a single species of fish gathered together solely for the purpose of spawning. See FAQ’S

There are two general types of spawning aggregation, “Resident” and “Transient”; both involve gatherings of fish at densities of at least 3 or 4 times more than during non-spawning periods.

Resident aggregations are formed by fish that travel short distances from their home areas or shelters to aggregation sites and assemble on a regular basis, sometimes almost daily, and often over extended periods throughout the year. Such species are generally small to medium in size. Aggregation formation may be associated with particular lunar phases. 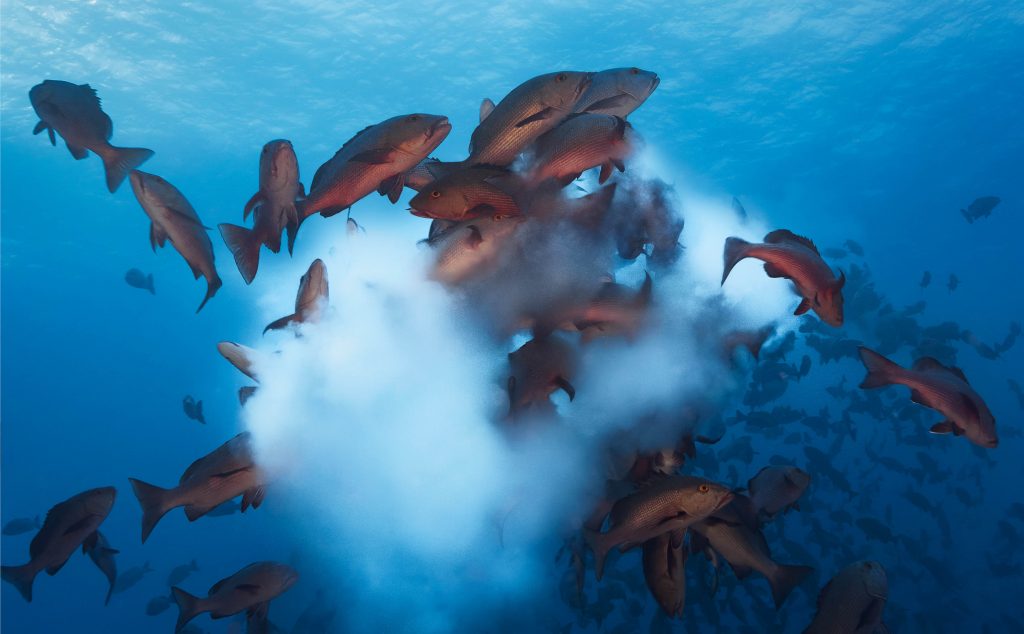 Aggregation formation is often synchronized to particular lunar phases. As a general rule, transient aggregations are less common (i.e. there are fewer of them) and of shorter duration than resident aggregations. They also tend to form less frequently.

Over 100 species of reef fish aggregate to spawn, including many groupers, snappers, porgies, surgeonfish, rabbitfish, parrotfish, mullets and wrasses amongst other fish families. Many of the most commercially important species have this reproductive habit, highlighting the need for management to maintain the species and their fisheries.

Aggregation-spawning is also typical among many of the most commercially significant species that occur in temperate and colder waters around the world. In fact, most commercially significant species have aggregation as a behavior associated with reproduction, Examples are extremely diverse, ranging from cod (see video) and herring, to croakers, seabass, orange roughy, (see video) Alaska Pollock, and grunion (see video) amongst many other species.

SCRFA has supported or produced videos to highlight the importance of aggregations for fishes, fisheries and ecosystems, and to explain why management is so important. See Natural Numbers for an example of the Gulf corvina (Cynoscion othonopterus) aggregation fishery in Mexico and its susceptibility to fishing. Understand how marine protected areas help to protect the camouflage grouper (Epinephelus polyphekadion) in French Polynesia (see video) and the Nassau grouper (Epinephelus striatus) in the Cayman Islands (see video).