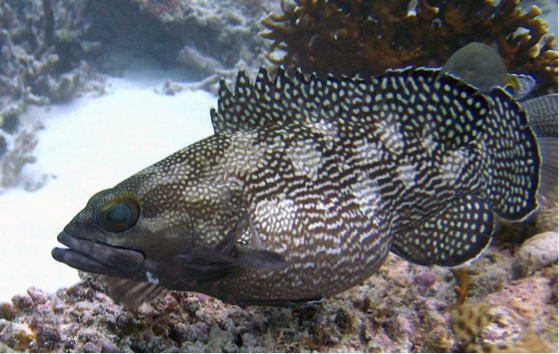 Range Description: This grouper occurs widely but in the Indo-West Pacific from East Africa to the Marshall Islands and Fiji, and Australia (Queensland and the northwest offshore reefs) to the Ryukyu and Ogasawara Islands, Japan. Its occurrence is patchy in the Indian Ocean and does not occur along the coasts of continental south Asia. Occurs between 5-60 metres.

Species Summary: The white-streaked grouper is solitary other than during the reproductive season. It inhabits inner coastal and lagoonal coral reefs, outer reef areas as well as back-reefs, and also is seen in brackish waters. In Okinawa, it is closely associated with branching corals, particularly Acropora spp. It reaches a maximum total length of 40 cm but more usually occurs to 30 cm total length. This is a cryptic species that consumes crabs, fish, shrimps and prawns. The species appears to be a monandric protogynous hermaphrodite, with 50% sex change occurring at 27 cm total length and 7 years of age. Its maximum recorded age in Japan is 20 years in Japan and 30 years in Australia. Age at 50% first maturity is about 3 years at a total length of 19 cm.

Spawning occurs in aggregations which have been reported from Sabah-Malaysia, Kavieng-Papua New Guinea, Roviana Lagoon-Solomon Islands and on sand/rubble substrate near a reef pass in Okinawa, Japan. Where information is available, the aggregation period appears to be very short, occurring during one or two months each year in the 7-10 day period leading up to the new moon. Movement to and from the aggregation site in Okinawa ranged from 2.2 to 8.8 km with an average of 5-6 km and spawning occurred between April and June. Aggregations formed between October and January in the Solomon Is. 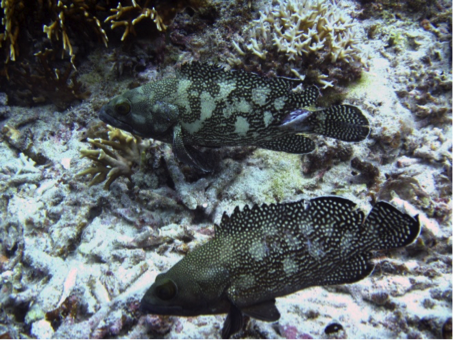 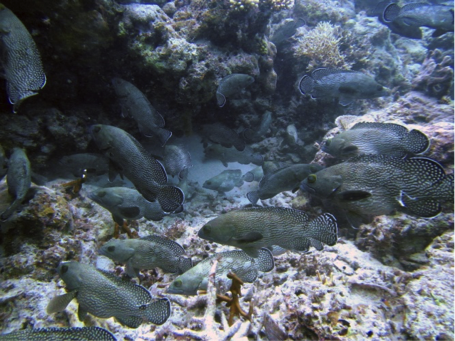 Fisheries: This grouper is not common but is of some interest to fisheries. It is caught using hook and line, gillnets, spears and traps, and even blast fishing (Malaysia) and it is found in the live reef food fish trade in south-east Asia. In Japan it was numerically the dominant grouper in Naha market, Okinawa in 2001 and was taken in small numbers in experimental catches in New Caledonia. During a market survey in Pohnpei, Micronesia, in 2005, only one individual of this species was observed The species is targeted on its spawning aggregations, for example in the Solomon Islands, the Seychelles and Japan and most of the annual catches recorded are taken from the aggregations. Although little is known of the landings of the species, declines in catches have been noted. Spawning aggregations in northern Borneo are thought to be extirpated. In Japan in the early 1990s annual catches were about 28 t and these declined to about 6 t by 2015. In the Seychelles the species once had a large spawning aggregation in shallow waters off the north east coast of the principle island of Mahe. This aggregation occurred each April; boats lined up along the coast to catch large numbers of this fish. It has since declined at least in part, if not entirely, as a consequence of overfishing the spawning fish.

Management/Conservation: In Japan, Yaeyama Islands, the only known aggregation of the species in the country was once fished but has been protected since 2010. The protection of this aggregation, if enforced for long enough, promises to support recovery of the species in the area. In Australia, catch of white-streaked grouper is regulated along with certain other groupers through a 38 cm minimum size-at-catch restriction. In Pohnpei, sale of this species is prohibited from 1 March-30 April annually. In Chuuk (Micronesia), there is a catch, sales and export ban on grouper species from January-May.

Ohta I. and Ebisawa A. 2015. Reproductive biology and spawning aggregation fishing of the white-streaked grouper, Epinephelus ongus, associated with seasonal and lunar cycles. Environmental Biology Fishes 98: 1555-1570.

Ohta, I., and Ebisawa, A. 2016. Age-based demography and sexual pattern of the white-streaked grouper, Epinephelus ongus in Okinawa. Environmental Biology of Fishes 99: 741-751.

Ohta, I., Akita, Y., Uehara, M. and Ebisawa, A. 2013 Stock assessment of the white-streaked grouper Epinephelus ongus in the Yaeyama Islands: implication of restoring effect by conservation of spawning aggregations. Annual Report of Okinawa Prefectural Fisheries Research and Extension Center. 74:49-59 (in Japanese).