Range Description: Distributed in the Western Atlantic: Massachusetts, USA and Bermuda to southeastern Brazil, including the Caribbean Sea and the Gulf of Mexico. The species is most abundant around the Antilles, the Bahamas and off southern Florida. The adult depth range for mutton snapper is down to 95 m, possibly deeper.

Species summary: Mutton snapper are found in a range of different habitats, predominantly associated with seagrass beds when younger, and coral reefs as it grows and matures. The species produces pelagic eggs and the larvae are estimated to remain in the plankton for approximately 25-37 days before settling in seagrass beds and associated shallow habitats. The species feeds mainly on crustaceans, fishes and mollusks.

Mutton snapper are relatively long-lived with individuals reaching estimated sexual maturity at four years and about 40 – 50 cm FL in Cuba. Maximum total length can exceed 90 cm TL and the species is commonly taken up to a length of 50-70 cm. Maximum age is variable by location but typically less than 20 years, although a fish of 29 years was reported from east Florida.

A relatively solitary species, mutton snapper occurs in small groups outside the spawning season and gathers in large aggregations to find a mate and to spawn. The species is gonochoristic (i.e. sexes are separate with no sex change) and forms annual spawning aggregations of about a week around the full moon period, for several months annually, typically peaking in May and June. However, month of spawning can vary even within a country, as in Cuba where peaks can occur between May and August depending on the location. Aggregation sites have sandy, rocky or coral habitat and occur on or adjacent to shelf breaks, with most recorded sites at 20-40 m. Spawning aggregations are known from at least 10 countries or territories with over 25 aggregation sites identified to date in the region.

In an interesting example of a possible ecosystem role for mutton snapper spawning aggregations, mating adults at Gladden Spit, Belize, release large clouds of eggs that are preyed upon by whale sharks. These sharks may time their movements to take advantage of these massive and predictable pulses of eggs each year, and regularly gather at known spawning aggregation sites in the spawning season. 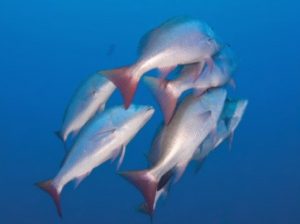 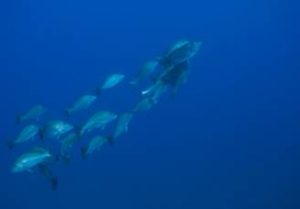 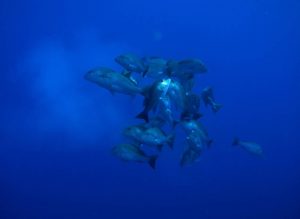 Group spawning of mutton snapper; small groups form within much larger aggregations and rise up into the water (left and middle photo). The large cloud to the left of the fish in the right photo contains the released eggs and sperm of the gathered spawners which quickly return to the substrate. Photos by: © Christopher Parsons

Management: Some species-specific management is in place in multiple countries across the region, ranging from minimum sizes, gear controls, bag limits, export controls, and temporal and/or seasonal controls during the spawning period. However, more management is needed to stem declines in multiple countries. It is recommended that precautionary management measures be taken and that catch and effort data are collected at the species-specific level (i.e. not just lumped in as generic ‘snapper’ data) to better understand trends over time, outcomes of management and for planning and assessment purposes.

Fisheries/Conservation: The mutton snapper is a prized fishery species and among the more abundant snappers landed, thereby supporting many local economies. Recorded yields range from a few tens or hundreds, to several thousand tonnes annually at the national level. It is taken in commercial, recreational and artisanal fisheries by a wide range of gear types, including boat seines, beach gill nets, set nets, hooks and lines with electric or manual winches, bottom longlines, traps, and by divers using spearguns. The species is important both domestically and in international trade, supplying markets with high quality fresh and frozen fillets or whole fish. Exports are mainly to the United States.

Stock assessments in United States waters indicate declines in commercial landings, but that overall these stocks are not overfished, and there are declines in catches in several other countries in the region. Where the species is heavily fished, such as some parts of Brazil, Cuba and Colombia it is considered to be overfished. However data collection is not thorough for the species which is often lumped into databases under a general category of ‘snapper’. Not all countries that fish the species report annual landings to the Food and Agriculture Organization of the United Nations.

Key Publications on biology, trade, fisheries and management since 2010 (the IUCN Red List assessment and FishBase accounts are excellent sources of publication citations)