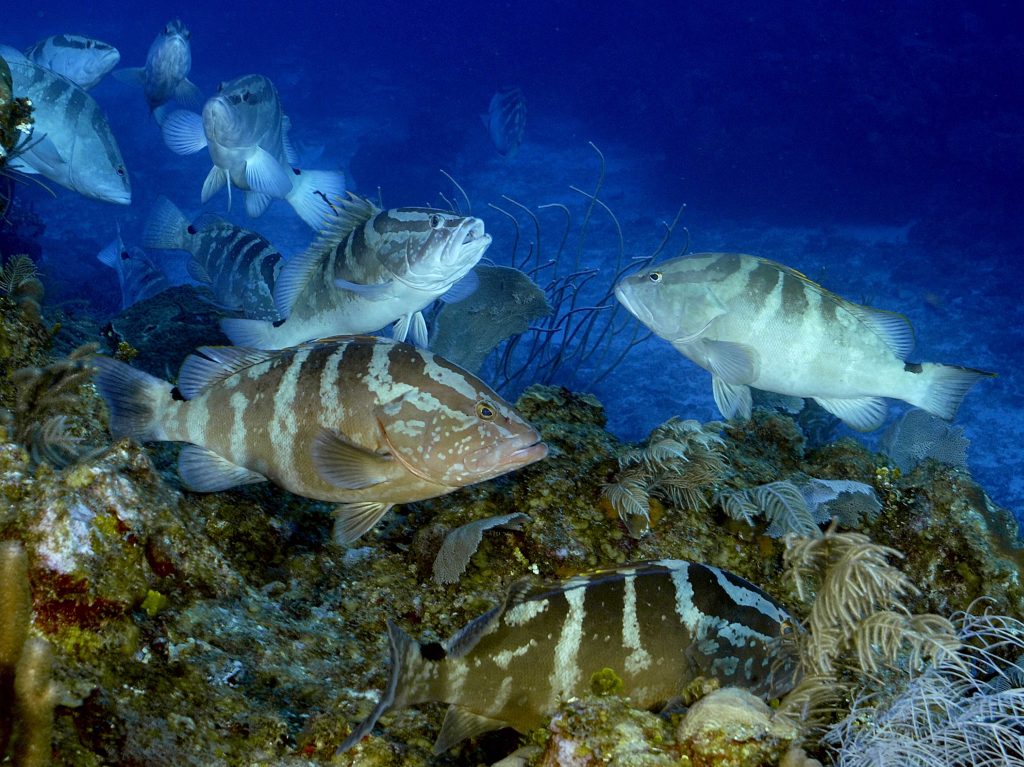 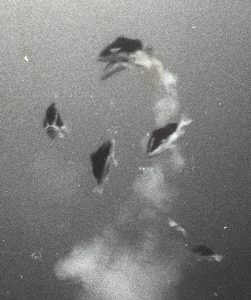 Range Description: This species is distributed in the western Atlantic from South Carolina, south along the U.S., Bermuda, the Bahamas, in the Gulf of Mexico from the Florida Keys, the Flower Garden Banks, southwestern Texas and Tuxpan, Mexico along the northern Yucatan to northwestern Cuba, throughout the Caribbean Sea, and along the South American coast to Venezuela. Its depth range is 0-255 metres. For details about countries and a map, see the IUCN Red List Assessment.

Species Summary: The Nassau grouper prefers clear waters around high-relief coral reefs and rocky substrate. Adults eat fishes and crustaceans, with fishes becoming the primary diet as the groupers grow larger. Age and size of sexual maturation are about 4-5 years and of 55 cm total length, although these vary somewhat geographically. Maximum recorded age is 29 years and the species can reach 122 cm total length and 25 kg. The Nassau grouper is functionally gonochoristic but passes through an initial juvenile bisexual phase (i.e. the gonads consist of both immature spermatogenic and oogenic tissue) but may be capable of sex change. 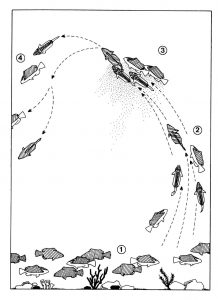 Like many other medium to large sized groupers, the Nassau forms spawning aggregations during short periods at around the time of the full moon during in one or two months each year. The locations and timing of many Nassau grouper spawning aggregations have been documented, however information may need to be updated to confirm the current status, i.e. the number of fish present. Their spawning aggregations are known in about 14 of about 42 countries/overseas territories in the wider Caribbean Region, with over 100 aggregation sites described to date (see Table shown below). Pelagic eggs are produced in the aggregations when the fish rise up in small groups (usually led by a single dark-coloured female) to spawn and, after a pelagic larval period of about 6 weeks, settlement typically occurs in shallow waters such as in macroalgal beds and coral-rubble areas.

Fisheries: The Nassau grouper once formed what were almost certainly the largest aggregations of any grouper ever reported. These formed the basis of large and important seasonal fisheries, particular in insular and offshore areas of the Caribbean. For example, in the early 1970s, on aggregation in the Bahamas, which has since entirely disappeared, was estimated to have between 30,000 and 100,000 fishes present. Nowadays, however, most have declined to a small size of a few tens or hundreds of fish although several with a few thousand Nassaus still occur (e.g. Cayman Islands, Bahamas and Belize). Once the aggregations are lost, the fisheries declined because these depended on the young (eggs/larvae) produced by the aggregations, which are the only known opportunities known for the species. Also, much of the annual landings came from fishing on the aggregations. Because these aggregation-fisheries were typically not controlled, this was the primary reason for the declines in species across its range and its threatened status today. 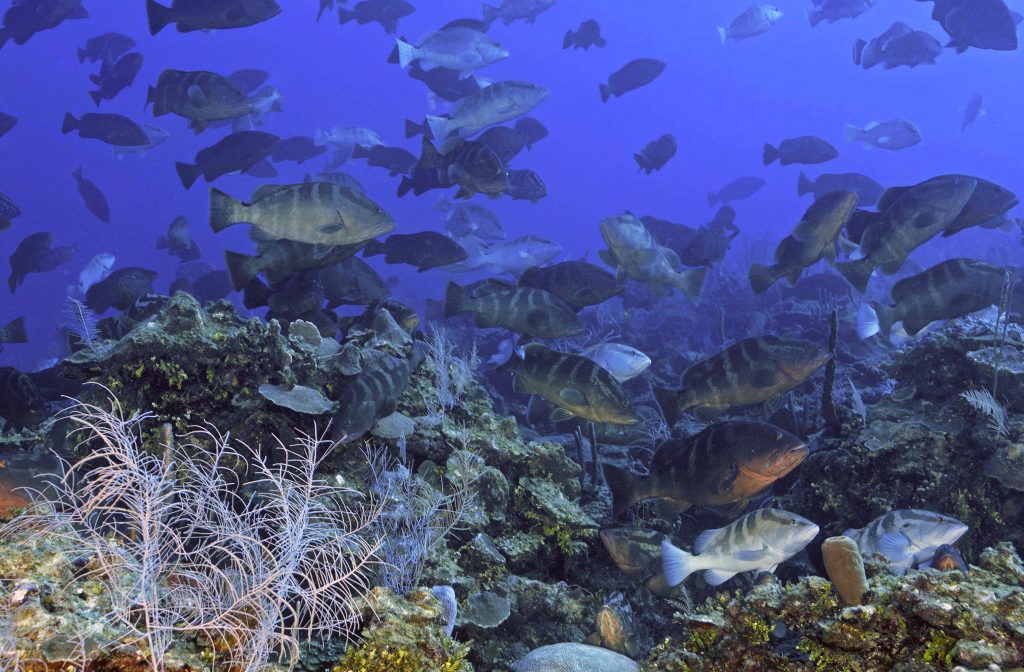 Management/Conservation: Despite its declines and critically threatened status, the Nassau grouper receives little management or conservation protection in much of its range. Those countries hosting the most aggregations (with large reef areas) may be particularly important for the future of the species (see Figure). While management is sparse, there are exceptions, with seasonal and or spatial protection, sometimes also accompanied by sales bans, in Belize, the Bahamas and the Cayman Islands. Other measures such as a moratorium or size controls were introduced in Bermuda, Cuba, Puerto Rico, USA, and the United States. Necessary management measures include seasonal and spatial protection of spawning aggregations, minimum sizes to protect juveniles, protection of Nassaus during spawning migrations (some fish may move several hundred kilometres between their home reef and spawning aggregations), as well as domestic and international trade controls (such as skin on policies to allow for species recognition and bans on export trade if the species is not fished sustainably). The species was recently listed on the SPAW (Specially Protected Areas and Wildlife) protocol but action to safeguard it has not yet been effectively taken under this protocol. It is listed as threatened under the Endangered Species Act of the United States and cannot be fished in United States waters. 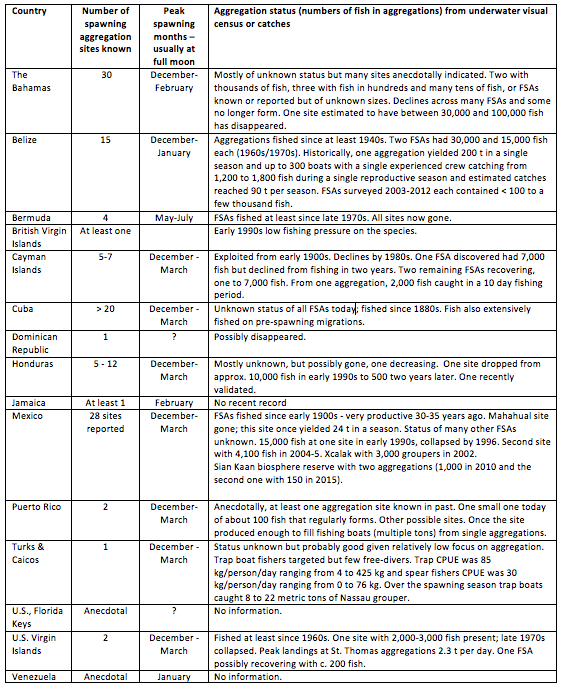 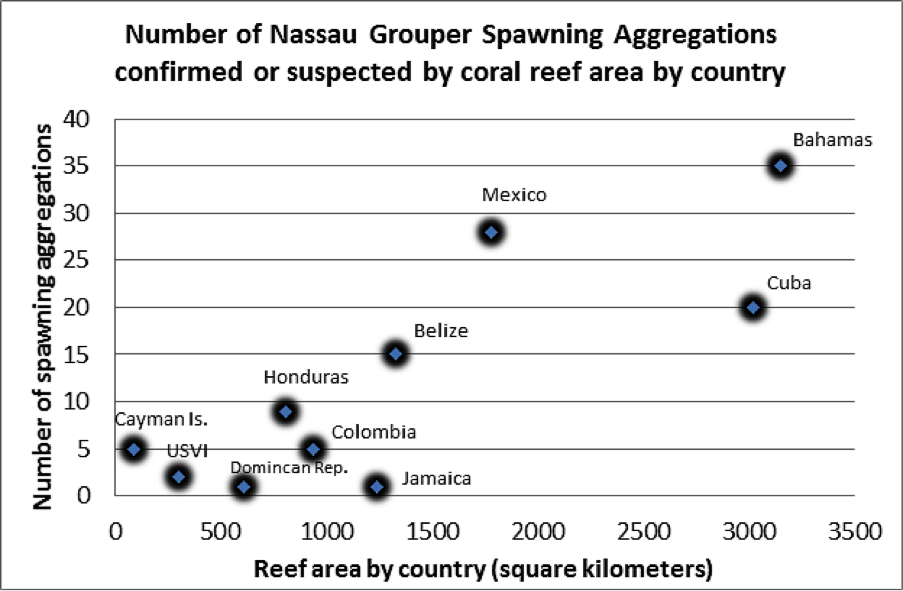 Figure 1. Number of Nassau grouper spawning aggregations reported in the 10 countries with the highest number of known or recorded aggregations for the species. Relationship is significant (Pearson R=0.8323; N=10; P=0.0028).

Burns Perez, V. & Tewfik, A. 2016. Brief history of management and conservation of Nassau grouper and their spawning aggregations in Belize: A Collaborative Approach. Proceedings of the Gulf and Caribbean Fisheries Institute, 68: 118-122.

Why aggregations need management and how to manage them: https://www.youtube.com/watch?v=5BV-la4MtZY