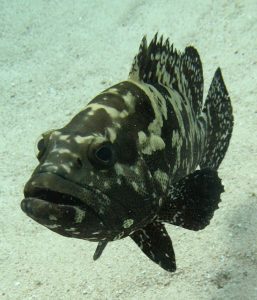 Range Description: Distributed in the Indo-Pacific from the Red Sea, along East Africa, south to Mozambique, and east to French Polynesia. In the western Pacific, it occurs from southern Japan to southern Queensland, Australia (Great Barrier Reef) and Lord Howe Island (Heemstra and Randall 1993). Its depth range is one to 60 metres (for map and countries see IUCN Red List Assessment).

Species Summary: The camouflage grouper is widely distributed around shallow coral reefs. While the species is naturally uncommon, it is occasionally locally abundant during its brief annual reproductive season when it migrates to sites to form spawning aggregations which can be very numerous. 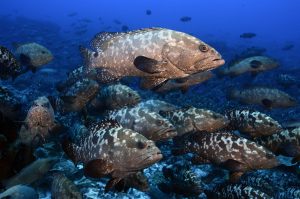 The largest of these are estimated to include many thousands of fish; from 10,000 (Pohnpei-although numbers have declined since this estimate was made in the early 2000s due to overfishing) to about 17,000 fish. This estimate, from 2016, was in French Polynesia-in a protected area, where this aggregation is a spectacular wildlife event.

The largest of these are estimated to include many thousands of fish; from 10,000 (Pohnpei-although numbers have declined since this estimate was made in the early 2000s due to overfishing) to about 17,000 fish. This latter estimate, from 2016, was in French Polynesia, in a protected area where this aggregation is a spectacular wildlife event. See: (1) https://www.youtube.com/watch?v=Za6v_Zddd2Q (2) film teaser**, (3) Episode 3 of BBC Blue Planet II series to see the aggregation.

The species is a gonochorist that becomes sexually mature by about 4-5 years and can live at least 3 decades, typically reaching about 60 cm with larger fish occasionally reported, although at least some reports may be misidentifications of E. fuscoguttatus. The camouflage grouper is a top carnivore that preys on portunid crabs, other crustaceans, fishes and molluscs.

The seasonal and lunar timing of aggregation formation and spawning is highly predictable in specific locations but varies across the geographic range of the species, occurring just before new moon in Palau, Solomon Islands, Papua New Guinea and the Seychelles, to just prior to the full moon in Pohnpei and Fiji. In most areas surveyed, aggregations form over 2-3 months, with peaks in abundance during just a single month each year. Variation occurs in arrival times between males and females, with males commonly present at the spawning site for longer periods and arriving prior to females. 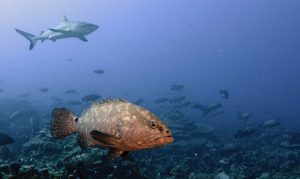 Fisheries: The species has long been part of coastal reef fisheries in much of its range but is particularly valued in the live fish trade in SE Asia, fetching a high price at retail. It has been part of this trade for several decades but there has also recently been growth in the international marketing of chilled/frozen fish, for example out of Indonesia and the Maldives, as demand for groupers increases. Fish sizes in trade are declining, with more and more juveniles being sold. To supply commercial trade, spawning aggregations are sometimes heavily targeted by fishers. But, due to overfishing, especially on its brief and highly predictable annual spawning aggregations each year, the camouflage grouper has experienced steep population declines in many areas and it is now listed as threatened globally (Vulnerable) on the IUCN Red List (2018). 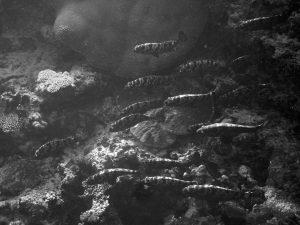 Management/Conservation: Despite its declines and protected status, the camouflage grouper receives little management or conservation protection in much of its range. There are exceptions, however, with national and/or traditional protective measures in some countries. Species-specific sales (Pohnpei, Palau) and catch bans (Palau) are in place during all or most of the reproductive season. No-take protected areas specific to spawning aggregation sites are in place in Palau, Pohnpei and the Solomon Islands. Chuuk has sales, export and catch bans from January to April in the spawning season). Fiji has seasonal protection from June to September for several aggregating grouper species, including the camouflage grouper. In French Polynesia a large aggregation is in a protected area and the Maldives has introduced minimum capture and trade sizes for the species. Important measures to safeguard its population include protection of its spawning aggregations, and minimum size measures to protect juveniles and allow them to reach reproductive size and age. 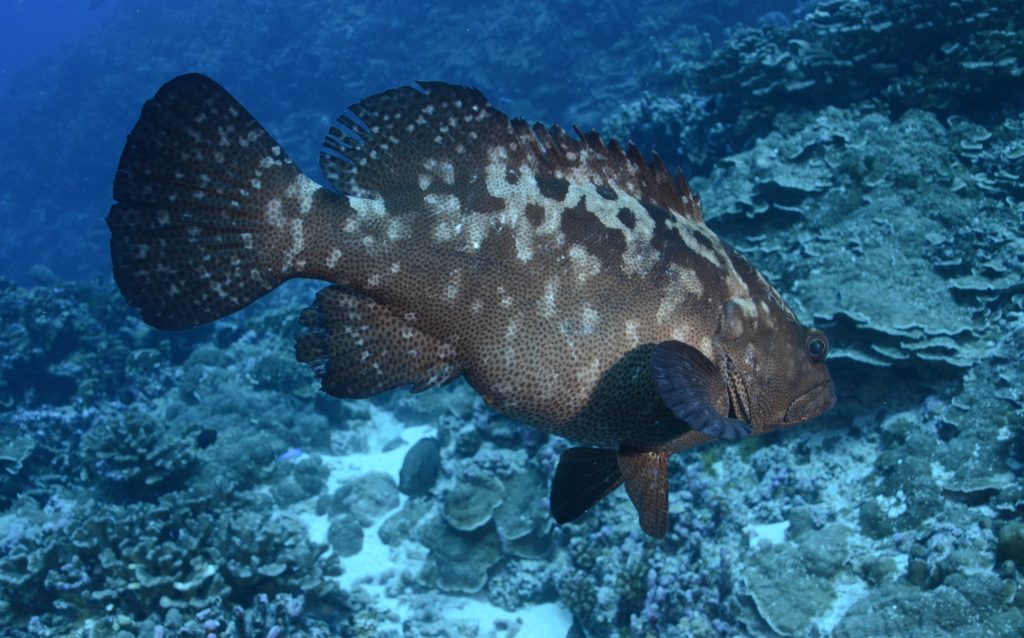 For current perspectives on live reef fish trade in Southeast Asia, there are two recent publications: