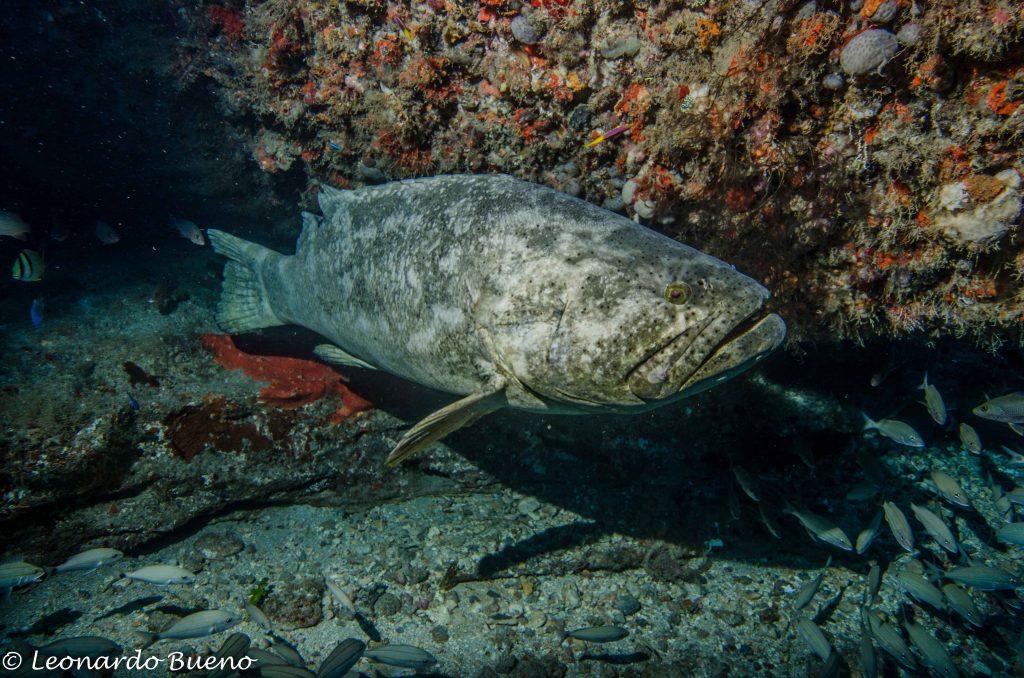 Range Description: This species is distributed in the Atlantic Ocean from northeastern Florida, south along the U.S., throughout the Gulf of Mexico and occurs Caribbean Sea, as well as along South America to Santa Catarina, Brazil. In the eastern Atlantic, it occurs along West Africa from Senegal to Cabinda, Angola (for map and countries see IUCN Red List Assessment). Occurs down to about 50 m. 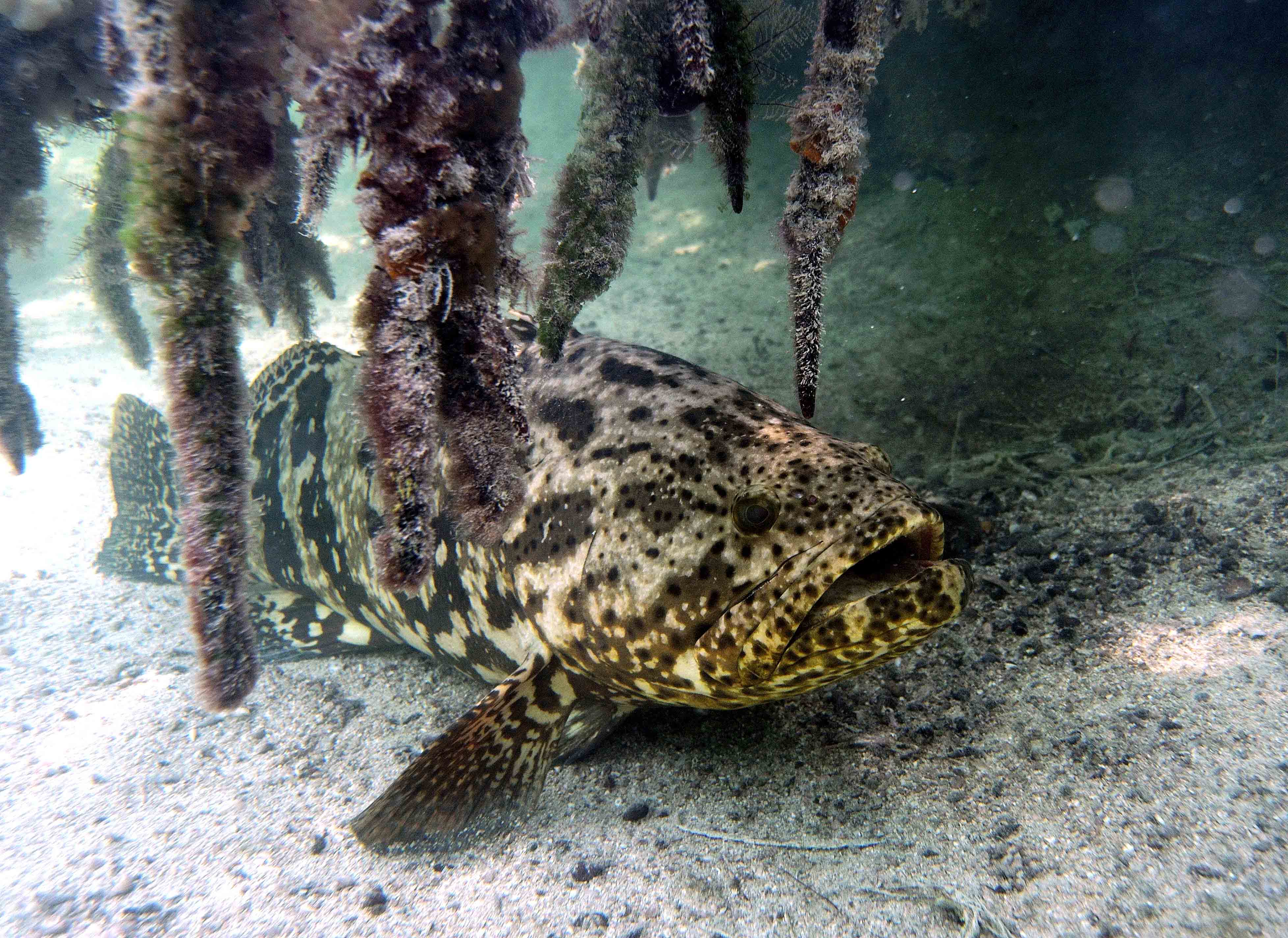 This species primarily consumes fishes, crabs and crustaceans, generally lower trophic level species. Maximum total length is 250 cm. Species longevity, as determined by otoliths (small ‘earbones’ that can be used to age some fish, much like the rings that form in tree trunks), is at least 37 years and age of first maturity is about 6 years. It is the largest grouper in the western Atlantic, reaching over 2 m in length and nearly 450 kg in weight. Both juveniles and adults occupy home range areas, within which they exhibit some degree of territoriality, displaying to intruders with an open mouth, a quivering body and a booming sound generated by muscular contractions of the swim bladder. 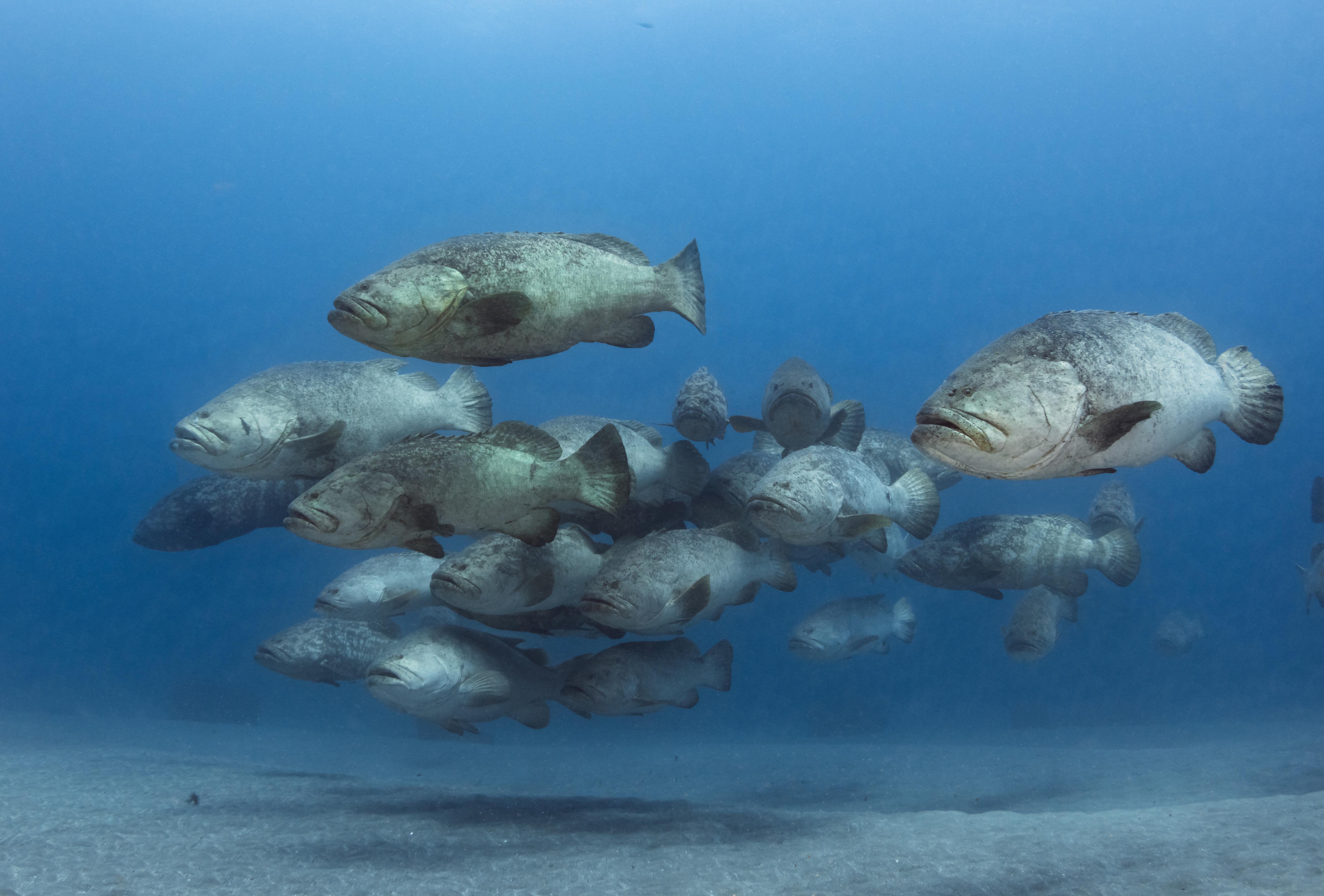 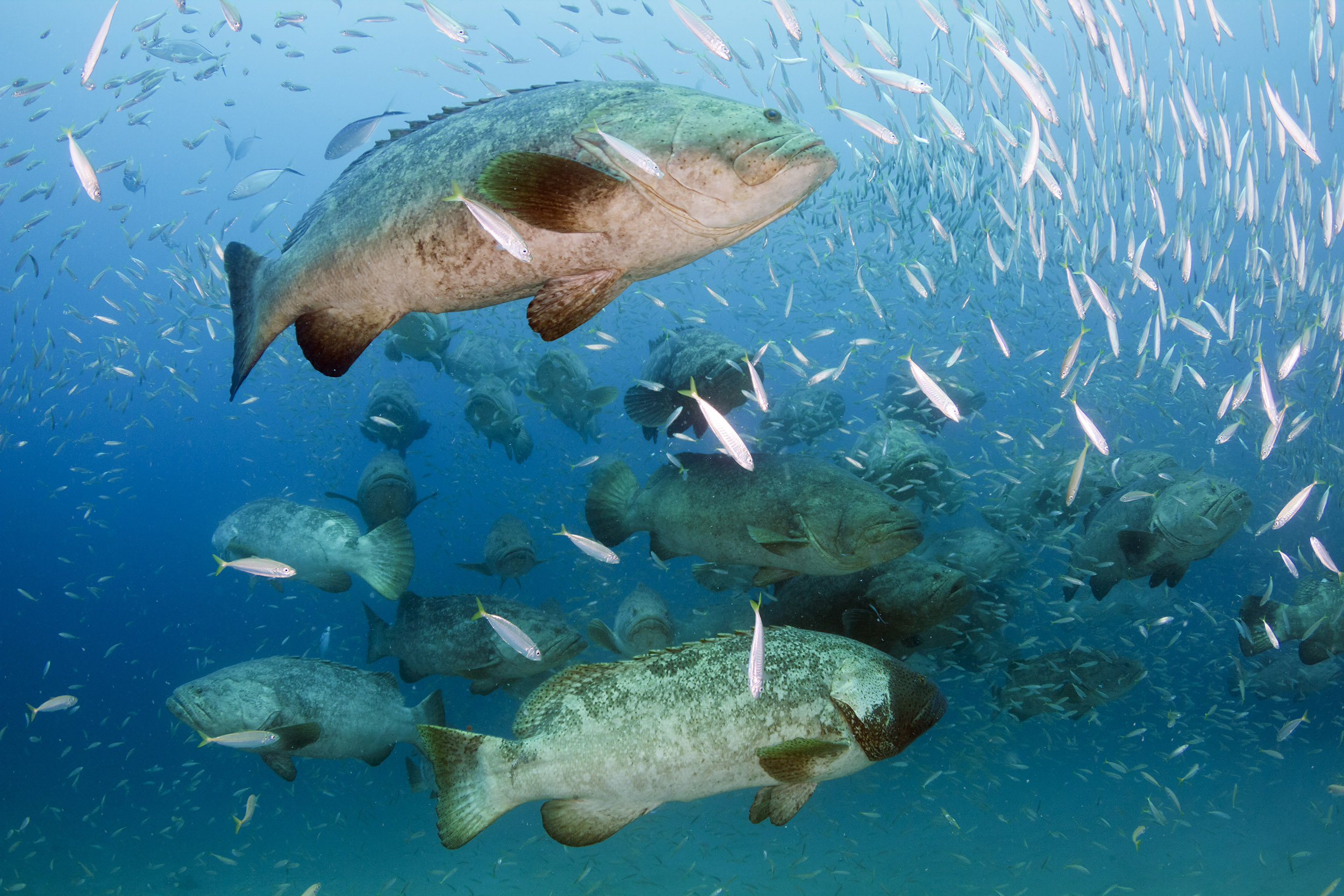 The species reproduces in small (fewer than about 150 adults) aggregations at the same locations, including shipwrecks, each year, generally from August to mid-October (with some temporal variation) in relatively shallow (10-50 m) waters. Adults can migrate up to 500 km from areas of residence to spawning sites, as determined from tagging studies. 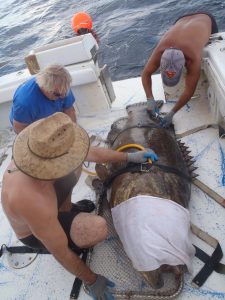 Males and females have similar coloration except during the spawning season when males can take on a courting pattern and when subtle colour changes occur. Unlike many other groupers, this species appears to be gonochoristic (separate sexes), although its sexual pattern has yet to be studied in detail. During the spawning aggregations, which can be dramatic with large numbers of large fish gathering in a small area, and are attractive to divers who are willing to pay to visit them, males and females interact and are often readily filmed and photographed.

Fisheries: Abundance is substantially reduced from former levels throughout the geographic range of the species, according to available information. This situation is largely attributable to overfishing and loss of nursery habitat. Many fishers have commented that large aggregations and large individuals have disappeared from many sites where these once occurred, leaving only remnants of historical abundance and only local knowledge of what was once present. In some cases, photographic and newspaper records provide an important historic perspective. In Florida, overfishing by commercial and recreational fishermen occurred rapidly because the characteristics of these fish–their longevity, aggregating behaviour and sedentary nature, combined with technological advances in positioning gear over the last 30 years–made them particularly vulnerable to fishing pressure. In South Brazil, historically present aggregations, once with least 60 individuals, have dwindled to only a dozen fish, according to local knowledge. In both Belize and Brazil, juveniles are heavily fished and are undergoing declines, with their important mangrove habitat also declining.

Management/Conservation: A fishing moratorium has been in place in U.S. waters for the past 27 years, and the population has been mostly increasing as a result, although it is not yet fully recovered. In Brazil, a fishing ban has been in place since 2002; however, due to lack of enforcement in most areas there is no sign of recovery, while removal and/or degradation of mangroves across the species range is a major threat to juvenile survival. In the U.S. other threats include reduced genetic diversity, health stresses caused by high mercury concentrations and localised recruitment failures caused by extreme red tide and cold water events in juvenile habitat. Nonetheless, there are signs of growth in both juvenile and adult populations, following protection, with one aggregation off the southeast Florida coast that existed at least since the 1960s and disappeared in the 1980s, reappearing in 2005 with about 65 individuals. The problem of overfishing is intensified by the pressure exerted on juveniles, known as “meretes”, which fishers do not recognize as having the same protected status as adults. 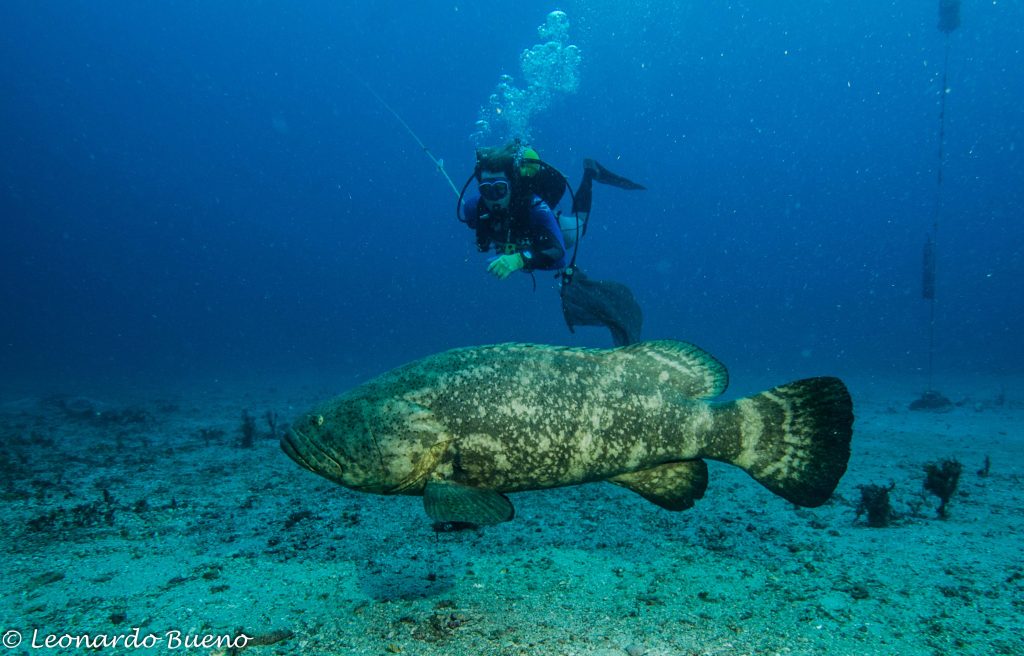 Due to increases in goliath grouper abundance, there is pressure in the U.S. from some commercial and recreational fishers to reopen its fishery. However, uncertainty regarding population status suggests proceeding in a precautionary manner. Regarding use and protection of this species, there is an interesting discussion regarding the human relationship with this (and similar charismatic megafauna), especially threatened species that were once heavily exploited regarding whether they should be exploited, and if so to what extent; interesting discussions on this issue are available in the papers cited by Mazzoldi et al. (2019); Koenig et al. (2019) and Shideler et al. (2016) (see below). Also, recent campaigns to raise awareness about the endangered condition and protected status of the species are increasing (e.g. www.merosdobrasil.org).

Shideler, G., and Pierce, B. 2016. Recreational diver willingness to pay for goliath grouper encounters during the months of their spawning aggregation off eastern Florida, USA. Ocean and Coastal Management 129, 36-43.