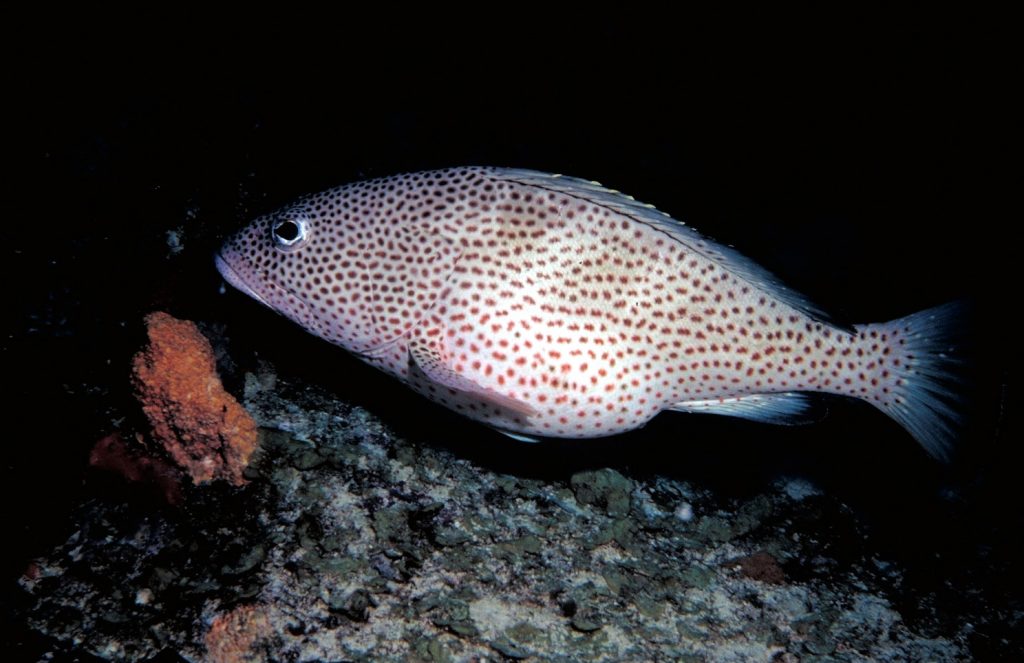 Range Description: The red hind is a western Atlantic species that ranges from North Carolina (USA) to Venezuela. It is the most common species of Epinephelus in the West Indies and also occurs in the Bahamas, Antilles, and along the Central and South American coasts. There are a few records for Brazil, but those are not confirmed. For map and countries see IUCN Red List Assessment. Depth range to at least 100 m.

Species Summary: Epinephelus guttatus is a relatively common species found in shallow reefs and rocky bottoms. It feeds mainly on crabs (Calapa and Mithrax) and other crustaceans (alpheid shrimps and scyllarid lobsters), fishes (labrids and haemulids), and octopus. Red hind are solitary outside of the reproductive season, with home ranges of 112 m2 to 5636 m2 (Puerto Rico). The species is a protogynous hermaphrodite in which all males derive from the sex change of adult females. Some females undergo sexual inversion at 28 cm TL; most fish larger than 40 cm are males. Sexual maturation is at about 24 cm TL and 3 years of age. The species can live for 17 years, exceptionally to 22 years, and reaches a maximum size of 76 cm TL.

The red hind spawns in aggregations between about December and March, approximately, each year in the Caribbean and May to July in Bermuda. Spawning occurs during the week before the full moon as determined by various studies, including the use of ultrasound.

Fish can travel more than 30 km from home ranges to spawning sites. The species spawns in pairs that form within single-male/multiple female groupings. Females rest on or close to the bottom while males patrol around an area that consists of one to five females, defending this territory from other males. The red hind produces distinctive sounds while aggregating which have been studied in detail and have been shown to have a varied repertoire.

Fisheries: The red hind is important in the fishery landings of the Caribbean and comprises much of the grouper catch in many areas. It is taken in commercial and recreational fisheries using SCUBA with speargun, hook and line, fish traps and nets. Much effort towards catching red hind is expended during the reproductive season of the species, often despite local regulations that protect aggregating fish. Other fishing gear, such as traps and nets, that do not specifically target red hind, may sometimes take them incidentally. Unregulated fishing on aggregations has contributed to declines in sizes, catches and catch rates.

Management/Conservation: Epinephelus guttatus is widely distributed, occurring in some coral reef protected areas in the Greater Caribbean and Florida. In the Caribbean and tropical western Atlantic, different management measures have been used to protect red hind spawning aggregations. These include permanent closures (St. Thomas, Bermuda), seasonal closures (St. Croix), and seasonal market closures (British Virgin Islands, western Puerto Rico). Although, the enforcement and implementation of regulations is often weak, effective protection has led to marked increases in catches and sizes, and to improvements in sex ratio (males tend to be selectively fished skewing sex ratios towards females), in the U. S. Virgin Islands, a clear demonstration that successful management can lead to recovery of depleted populations. Threats also come from destruction of coastal habitats (mainly coral reefs, mangroves, seagrass and lagoon habitats) by dredges, coastal fill projects and the impacts associated with high-density residential and industrial development of the coastline (water pollution, thermal pollution, increased sedimentation, etc.).