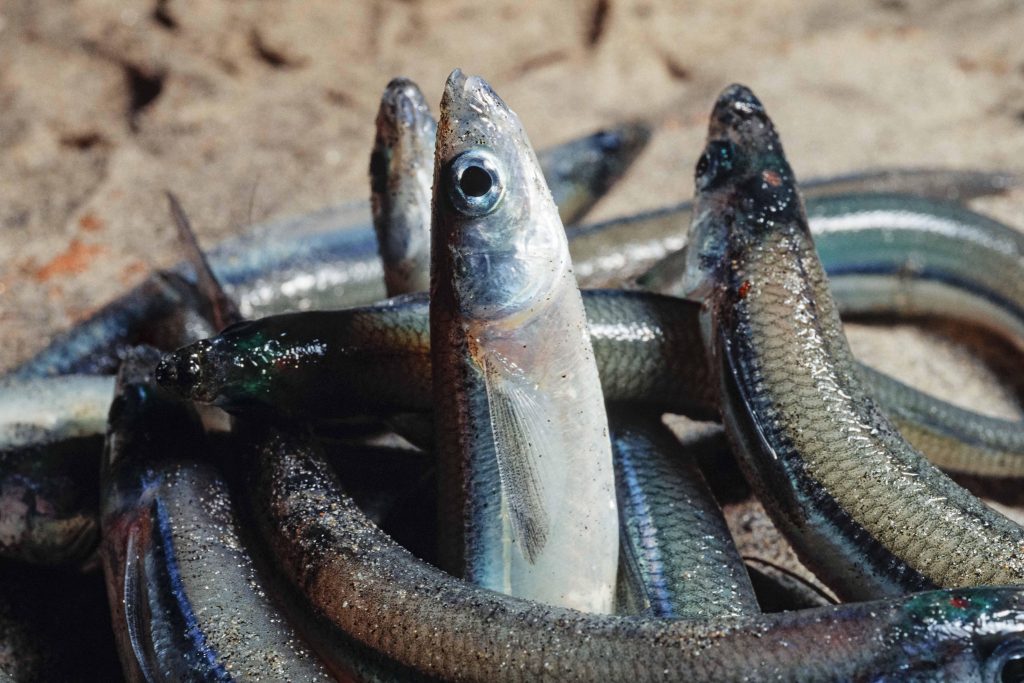 Range Description: The California grunion is endemic to the United States (i.e. it is only found in that country) with a relatively small geographic range, for a marine species. It is found along the Pacific Coast from Point Conception, California, to Punta Abreojos, Baja California Sur in shallow waters, typically close to the surface along the coastline.

This grunion grows to 19 cm Total Length (TL), lives about 8 years, and becomes sexually mature at about 12 cm TL. The species eats zooplankton and is itself eaten by sea lions, dolphins, squid, birds, and fishes such as croakers, halibut and sharks.

The species is one of very few fishes that mates and leaves its eggs on just a few beaches in its range that have suitable conditions, in spectacular nighttime spawning events. Mating takes place between about March and August, for a few nights following the full moon and just after the spring high tide. The fish swim synchronously towards a sandy beach and are carried onto the shore by waves. Females use their tail to dig into the wet sand, burying herself up to her pectoral fins, and lay clutches of eggs. Multiple males (up to 8) gather round single females (see above photo) and each shed their sperm before they get taken back into the sea by the waves. Most females spawn about six times during a reproductive season, producing up to 18,000 eggs in a season. Many of these eggs are eaten by birds such as herons and egrets, among other species.

After laying her eggs, females return to the sea after about one half to several minutes on shore. The fertilized eggs then remain buried in the sand until the next occurs following the new moon a fortnight later. During each spawning period fish spawn during the period two and six nights after the full and new moons, with fish collectively present for several hours on the beach. These gatherings attract a lot of human interest with people regularly visiting the events and documenting them for example: 2020 California Grunion run

Lots of interesting visual and educations materials are available on these spectacular spawning ‘Grunion Runs’. 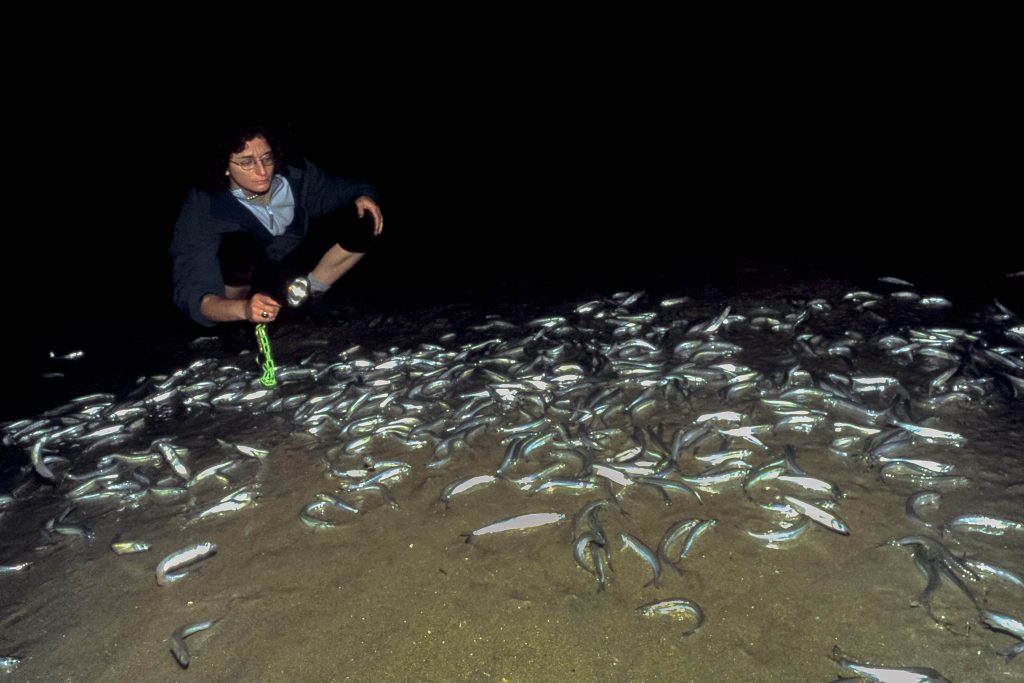 The importance of grunion to the Native American culture reaches far back in history. Hundreds of years ago tribes such as the Kumeyaay relied on grunion as a food source and a reason for gathering together on the shore. Today, the California grunion is of minor importance to local fisheries mainly taken during grunion runs when the fish beach themselves to lay their eggs and are easily taken. In a unique recreational fishery, people capture the fish out of water with bare hands. Grunion hunters are not required to report their catch, and there is no bag limit. California Grunion rarely appear in trawls and do not take a hook, so its population status is impossible to assess by traditional fishery methods.

The California grunion has been identified as a Key Indicator Species for the South and Central regions of California Marine Protected Areas, and as an indicator species for climate change on beaches. Gear restrictions, license requirements, and a two-month closed season, April and May, are in place but rarely enforced late at night. Where catches are allowed, anglers must be older than 16 years, have a valid California fishing license and can only use their bare hands to catch fish. During the grunion season, any beach activities must avoid disturbing sand where grunion eggs incubate. A citizen science group, the Grunion Greeters, is actively involved in monitoring and safeguarding the species.

After concern that beach grooming practices were harming grunion eggs incubating beneath the surface of the sand during spawning season, the first systematic study of the impact of humans on the sandy beach habitat of this unique fish was conducted in 2002 throughout California. The study originated in San Diego and involved a massive collaboration of concerned residents, numerous scientists, agencies and organizations, and hundreds of volunteers. The results effected significant and lasting change in official beach grooming procedures in San Diego and other municipalities throughout California.

Volunteer citizen scientists—the Grunion Greeters—provide vital observations and information. They collect data during spawning runs and submit reports online to be used for research and beach management. Research studies include population assessment of the grunion throughout their range in California, staging tables for embryonic development, effects of altered salinity, comparisons of microsatellite DNA between populations, hatching mechanisms, and evaluation of grunion spawning runs as potential indicators for the ecological health of sandy beaches.

Key Recent Publications on biology, trade, fisheries and management (note that the material summarized in this account is taken from the range of materials included in the account)